From cave to headset

All you need to step inside an underground reservoir is a virtual reality headset. Here's how software developers enabled us to visualize data like never before.

Get a quick glimpse into how SHIVR works in the video above. (Video: Torstein Lund Eik)

It was a Friday morning that looked like something straight outta Star Trek when the SHIVR team took their HTC Vive headsets to Exploration’s offices in Bergen. With a strange looking helmet on their head and two controllers in their hands they delved into the depths of reservoirs and got a first-hand look at the wonder inside.

“And now I can see what the faultline actually looks like. This is incredible,” geophysicist Trond Kirkevik said as he walked around inside of the reservoir.

While the people around him only saw an office kitchen area, Trond was immersed into the inside of reservoirs deep below the ground. From there he could see the wells and the paths drilling had taken, together with the seafloor, the shape of faultlines and rocks together with seismic and interpreted surfaces.

Other colleagues of Kirkevik also gave SHIVR a try and it didn’t take long for them to be impressed either:

“It really made me feel like I was standing in the middle of the data. SHIVR was a far more realistic experience compared to the VR walls we’ve used before.” 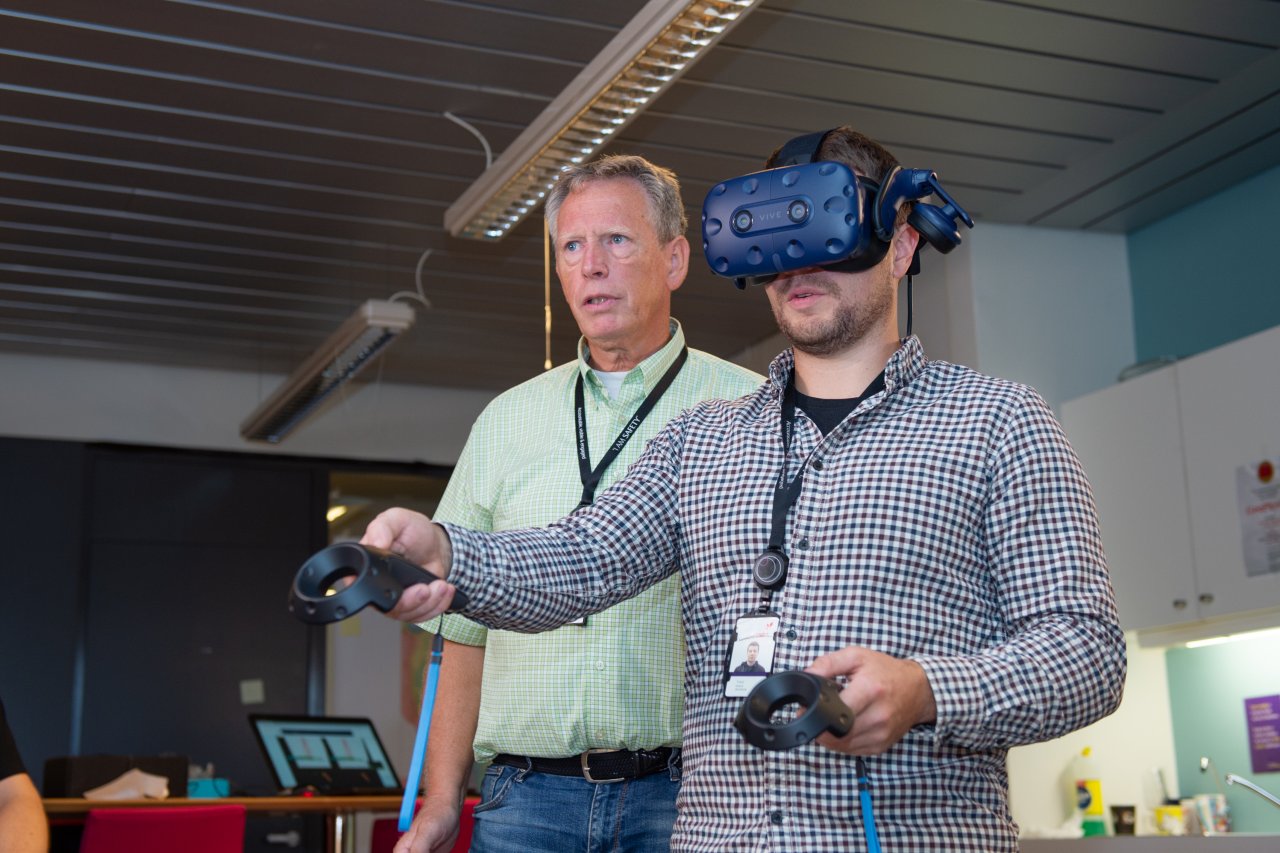 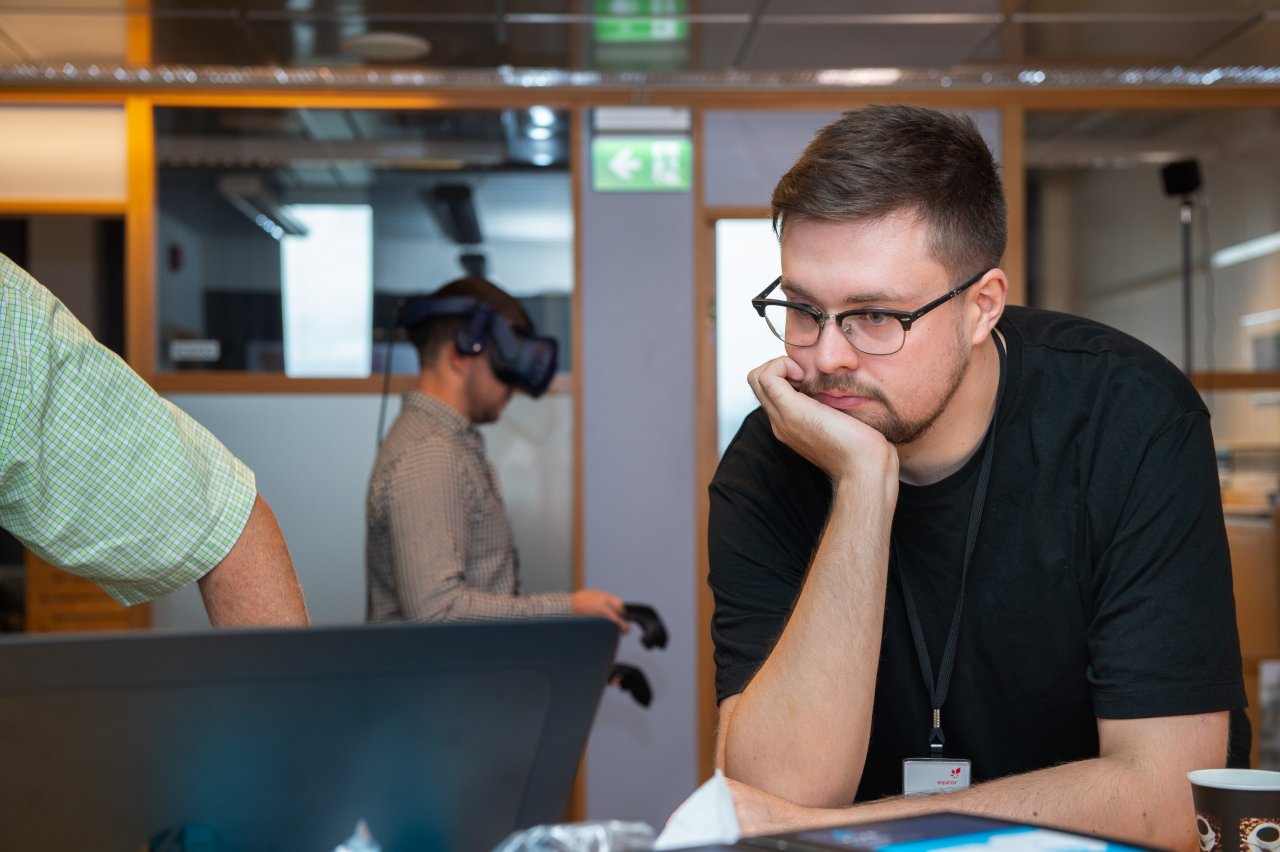 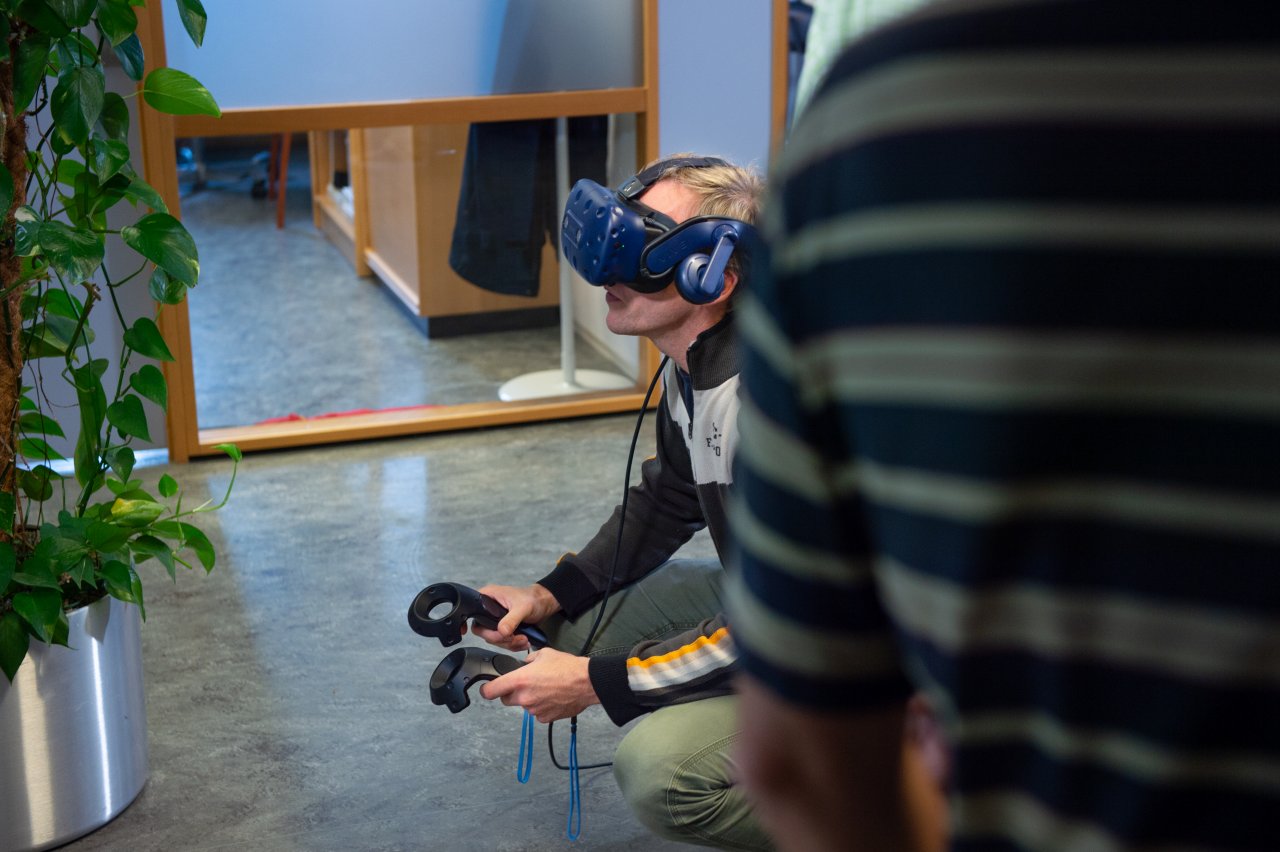 Crouching actually let`s you view data from a different angle. Using the headset you can wander about in the virtual world, while those without a headset can see everything the user is seeing on the connected laptop. (Photo: Torstein Lund Eik)

Now, you might be wondering what SHIVR actually is? Even though it’s name needs a revamp from “Statoil Highly Integrated VR” it’s quite a modern tool. At its core lays a visualization tool that brings together a variety of data which lets the user to get a 3D look at data, such as reservoirs or wells. It’s actually one of the oldest projects within Equinor, having started way back in ‘97, and was inspired by the automotive industry’s use of VR to create prototypes.

“There are so many different sources of data within Equinor but they’re all stored in different locations. We wanted to create an app that would let us gather all these different data types and visualize them in one world,” Jens Grimsgaard explains.

"SHIVR really helps to improve everyone’s data. As an example, a geologist can more easily explain a drilling engineer what his data mean and the reasoning for a change in drilling paths, and vice versa."

Grimsgaard is the project leader for SHIVR and has been around since the beginning. While nowadays SHIVR is running on a HTC Vive headset, which is lightweight and cheap, this was far from the case during its start.

In the early days the visualization center was a cave - a cube that could fit 6-8 people, where you would put on a pair of specialized glasses and then experience the feeling of walking into the data. But as we all know, the future is now and all you have to do is strap on the headset.

A cheaper and easier solution

“One of the main advantages of VR is the multidisciplinary cooperation it allows. It’s much easier to explain the meaning of data and clarify questions or problems about them when you see it all in 3D," Grimsgaard explains.

In addition to the cave, they also built VR “walls” where one or two projectors created a VR experience on the wall. You might’ve guessed it already - this way of doing it was wildly expensive. The cave and walls would cost somewhere between 2 - 4 million NOK each, while the HTC Vive costs 15 000 NOK.

“Eventually, the cave and the VR walls were turned off as they were too space-consuming or difficult to operate and most of our software also started to feature visualization,” he says. 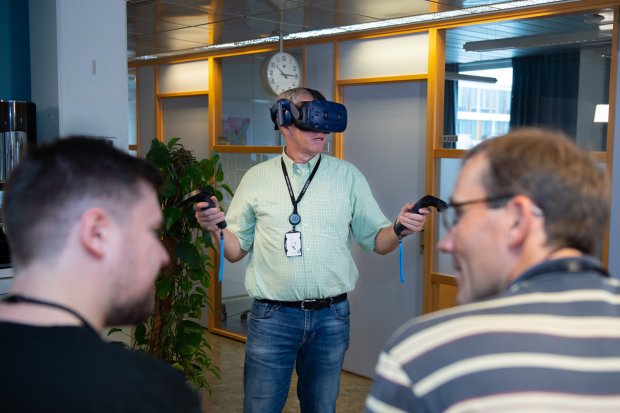 You might say the future is now, even though it can look a little funny from the outside. Photo: Torstein Lund Eik/Equinor

You might say the future is now, even though it can look a little funny from the outside. Photo: Torstein Lund Eik/Equinor

“Then, the head mounted displays (HMD) made their entry into the gaming world. Their biggest advantage is that they are very cheap, easy to setup and easy to use - in addition to giving a total feeling of immersion in data. All you need to do is to put the helmet on your head, and off you go,” Grimsgaard explains.

Who you gonna call? Software innovation!

And when there’s new software and technology to be used in a new way, Software Innovation were eager to answer the call. Jens Gåsemyr Magnus and Andrea Brambilla from IT SI’s Bergen office were given the task due to their experience with computer graphics.

“It’s been interesting work, especially considering most of the code was written between 1997 and 2009. Most of the technology they used is quite outdated and almost all of it was written from scratch with 400 000 lines of code,” Magnus explains.

“Thankfully, the code is quite good and the basic concept of the cave and HMD is the same. They both track head movements, so we basically had to tell SHIVR to use the signals from the HTC sensors instead of the cameras that tracked head movement. This is done by getting transformation matrices from the Vive and plugging them into SHIVR,” he adds.

Curious how the HTC Vive works? Then Jens G. Magnus has a breakdown ready for you. (Video: Torstein Lund Eik)

Another key component was how they rendered graphics. When rendering graphics for a monitor it’s all about the one point of view but VR is another ball game.

“The first thing you have to do is to render the graphics from two different points of view, because there is a different image for each eye,” Andrea Brambilla explains.

“After that we had to make sure that the Vive communicated properly with SHIVR. But there was a library available that we could use to make sure it went rather easy,” he adds.

How to set up the HTC Vive kit

So you got your hands on a VR kit and want to give it a spin? Here’s what you need to do:

Make sure you have enough space .- a minimum of 2 m x 1.5 m and a max of 6 m x 6 m. Connect the link box to your computer and plug in the headset. Place the two lighthouses so they form a triangle between them.

Tilt them at a 30-45 degree angle above your head. Sync the controllers and the headset. Get in the middle of the play area - and off you go! 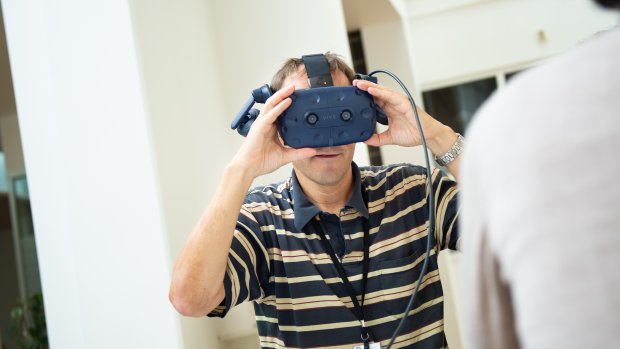 The HTC Vive Pro is a rather lightweight and compact system. Photo: Torstein Lund Eik/Equinor 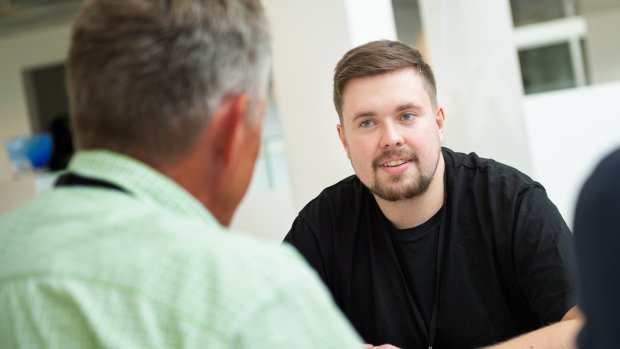 Jens was an obvious choice to work on SHIVR. Photo: Torstein Lund Eik/Equinor 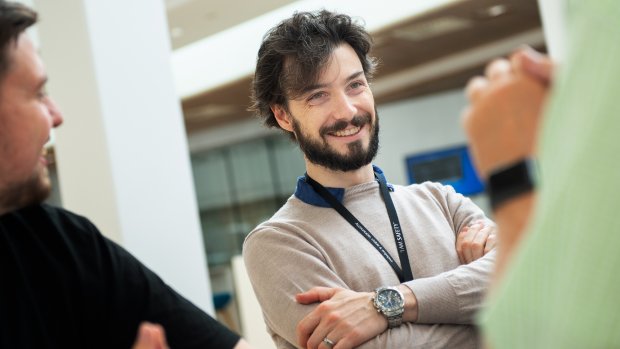 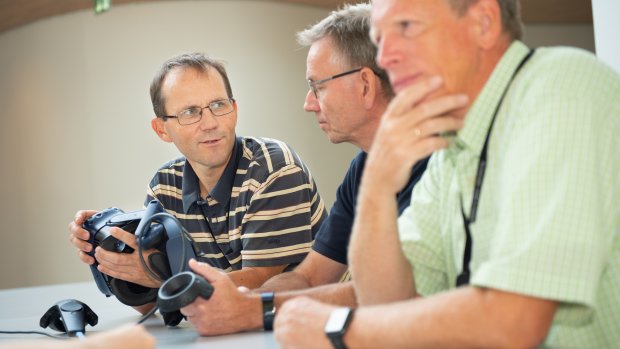 The HTC Vive Pro is a rather lightweight and compact system. Photo: Torstein Lund Eik/Equinor

Jens was an obvious choice to work on SHIVR. Photo: Torstein Lund Eik/Equinor

If you haven’t tried VR yet it’s quite difficult to explain what it looks - and feels like. When you put on the headset and enter SHIVR it feels as if you left the room you were just in and entered a new one. Around you you can see pipelines, wells and a landscape that stretches much further than the room you’re in does. But it’s not all fun and games.

“You can get motion sickness if you’re flying around the world too fast or you can get headaches when you wear the headset for too long. There’s a lot of work in understanding how to design the software so that we don’t get these issues,” Brambilla says.

“It’s not about what the user thinks but how the user feels. The issue of motion sickess is a funny thing, because it’s a problem that is known to go away with use. So we might be investing time in trying to solve a problem that won’t be a problem in the future when everyone is used to VR."

Instead of flying you can grab onto points in the landscape, which helps to prevent motion sickess - but that’s quite difficult when inside reservoirs. Not to mention time consuming, as grabbing your way across 20 kilometer wide reservoirs at an arm lengths speed is quite the workout.

“These challenges are very interesting because at this point it’s not just a technical problem. I have to see how people react when they’re using it and it can be difficult to find a solution, since experienced users like me won’t have these problems,” Brambilla says.

He sees it as a fun challenge and a new aspect that you don’t normally see when working with computer science. 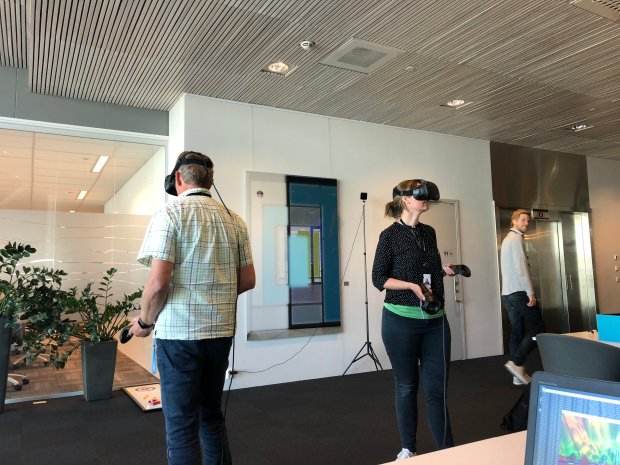 You don't need more than 2m x 1.5m space to play around with the VR kit. Photo: Jens G. Magnus

You don't need more than 2m x 1.5m space to play around with the VR kit. Photo: Jens G. Magnus

Virtual reality has, like any technology, both pros and cons, Jens Gåsemyr Magnus explains.

“One of VR’s biggest advantages is the sense of space you get when using it, which I don’t think you could achieve without VR. But I think it’s still a young technology when it comes to visualization and I haven’t seen much documentation surrounding it.”

While VR is a great tool to visualize and explain data, it needs a little fine-tuning in terms of basic work tools. Something as basic as taking notes still requires the user to take the headset off.

“When you’re working on a desktop you usually have a couple of applications open plus 4-5 browser tabs, and if you need to check something you can search for it but there’s no easy way to do this in a virtual environment now. It’s possible but not very accessible,” Brambilla tells us.

There are still problems left to solve but at the same time SHIVR is a quite magnificent tool, and feels like something that could very well be featured in a sci-fi movie or two. When we ask Jens Grimsgaard what the biggest advantage to SHIVR is, his answer is clear - it’s the possibility of cooperating across distances without meeting in the physical world. Instead, two virtual avatars become colleagues in the virtual world.

“This is something out of science fiction and you get a real feeling of awe when you experience it for the first time,” Grimsgaard adds.

The team is moving ahead with more work on establishing old and new functionality to SHIVR but who knows - you might be seeing your colleagues (or yourself!) in a virtual world real soon.

The most exciting opportunity with SHIVR you ask? The ability to cooperate across borders, Jens Grimsgaard tells us. (Video: Torstein Lund Eik)

Some of the people who have been involved with the SHIVR project: