When Software Innovation sent developers to work side by side with Johan Sverdrup’s subsurface team they were asked to spread the word of agile working. As a result we’re seeing groundbreaking results.

By placing fiber optic cables along our wellbore, we can record sound every meter, from the platform and down to the reservoir.  Then comes a near-impossible challenge: processing these massive data sets. Ticking in at 5 gigabytes each second, it’s the equivalent to streaming 15,000 Netflix movies simultaneously. A daunting task, but guess what? We’re making it happen.

“I’ve worked in IT for 18 years and this is by far the most exciting project I’ve ever worked on. This has never been done before in the scale that we’re doing this in, ” Espen Tjønneland explains.

Espen is one of the developers from Software Innovation working on the project together with Lindvar Lægran. Unlike on other projects, both Lindvar and Espen are actually sitting side by side with our subsurface team from Johan Sverdrup.

1) Fiber optic cables are placed on well pipelines
2) Lasers are emitted from the oil rig at the surface. This light travels down through the cable
3) If there are any irregularities this will create a break in the light as it travels
4) These breaks are registered in real time
5) These irregularities can be seen in a dashboard and investigated by our personnel.

Placing the fiber optic cables along the wellbore is easy, but the challenge is building the system to process these massive amounts of data. After being sent to shore through a high bandwidth connection the data will be processed by a powerful and dedicated server.

Maximilian is the product owner for Next Generation Reservoir Data Management Flow (NGRDMF). The fiber optics project is one of four within NGRDMF, and Max tells us having developers close to the team has been crucial in the project’s success.

"Work is well underway and servers have been ordered, ready to get to work for the Johan Sverdrup field this fall. The developers have also been acting as advisors, helping the subsurface team get a broader understanding of IT and all that comes along with it," Maximilian says.

"We can look at potential leakages, monitor production speed, flow in general, injection profiles and much more - all in real time. The list of what we can use these data for is almost endless. IT is not just providing a service but working alongside us and helping us design the whole flow of data much more efficiently." 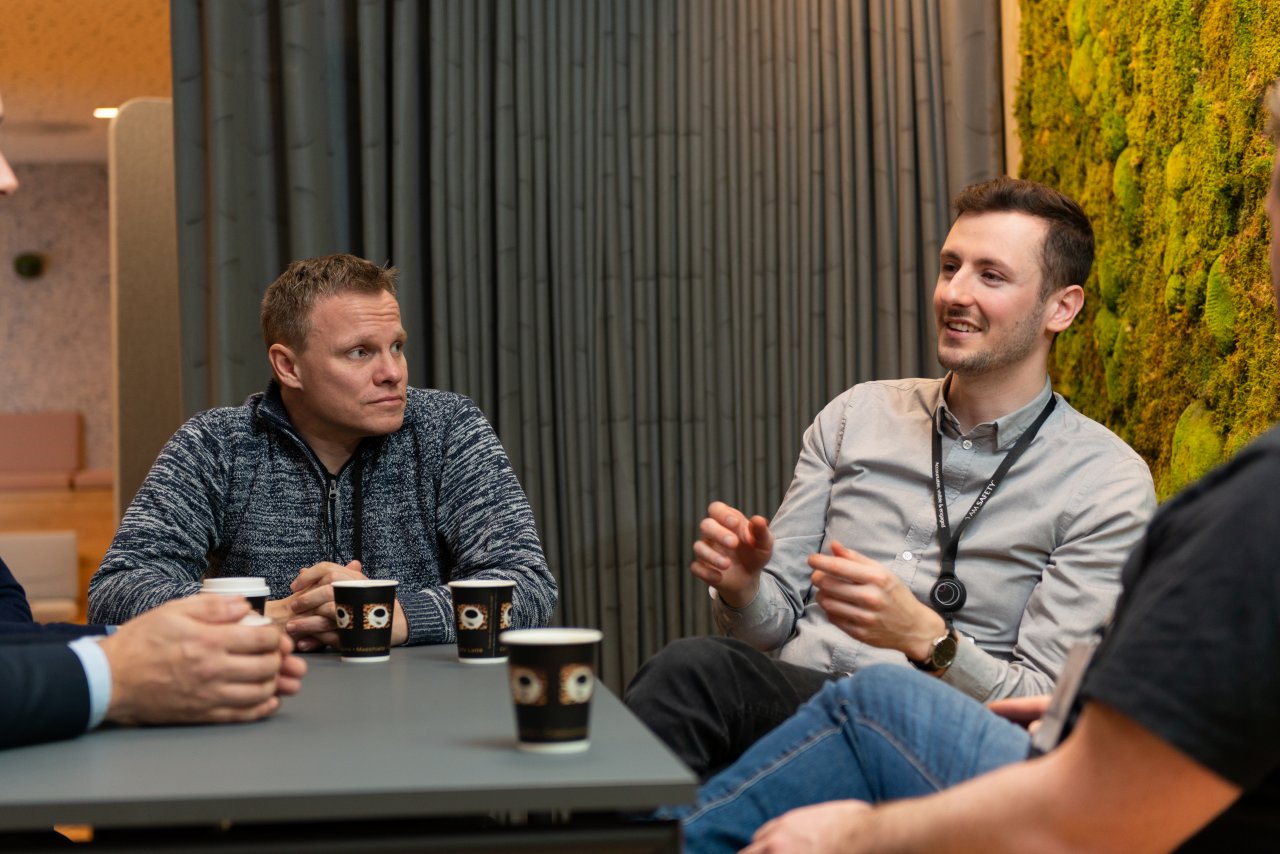 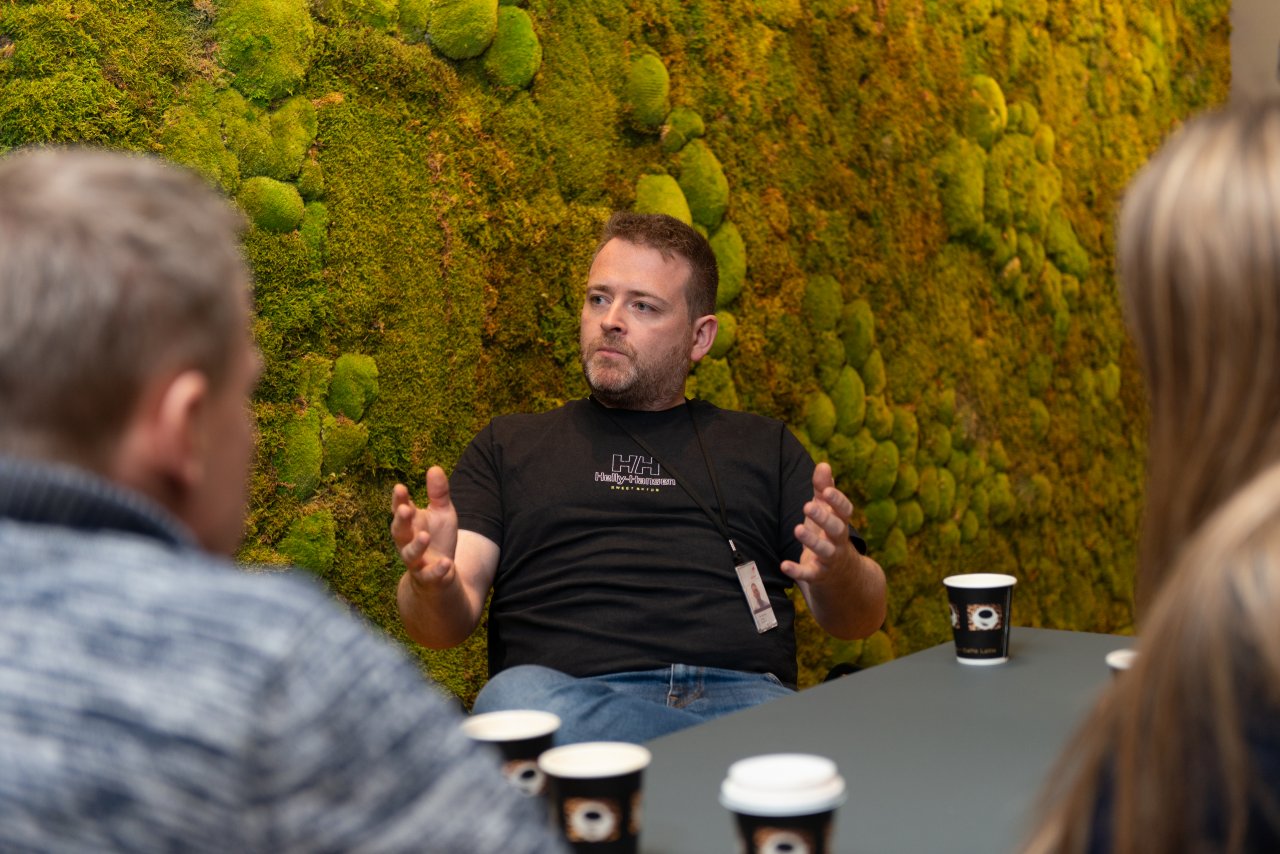 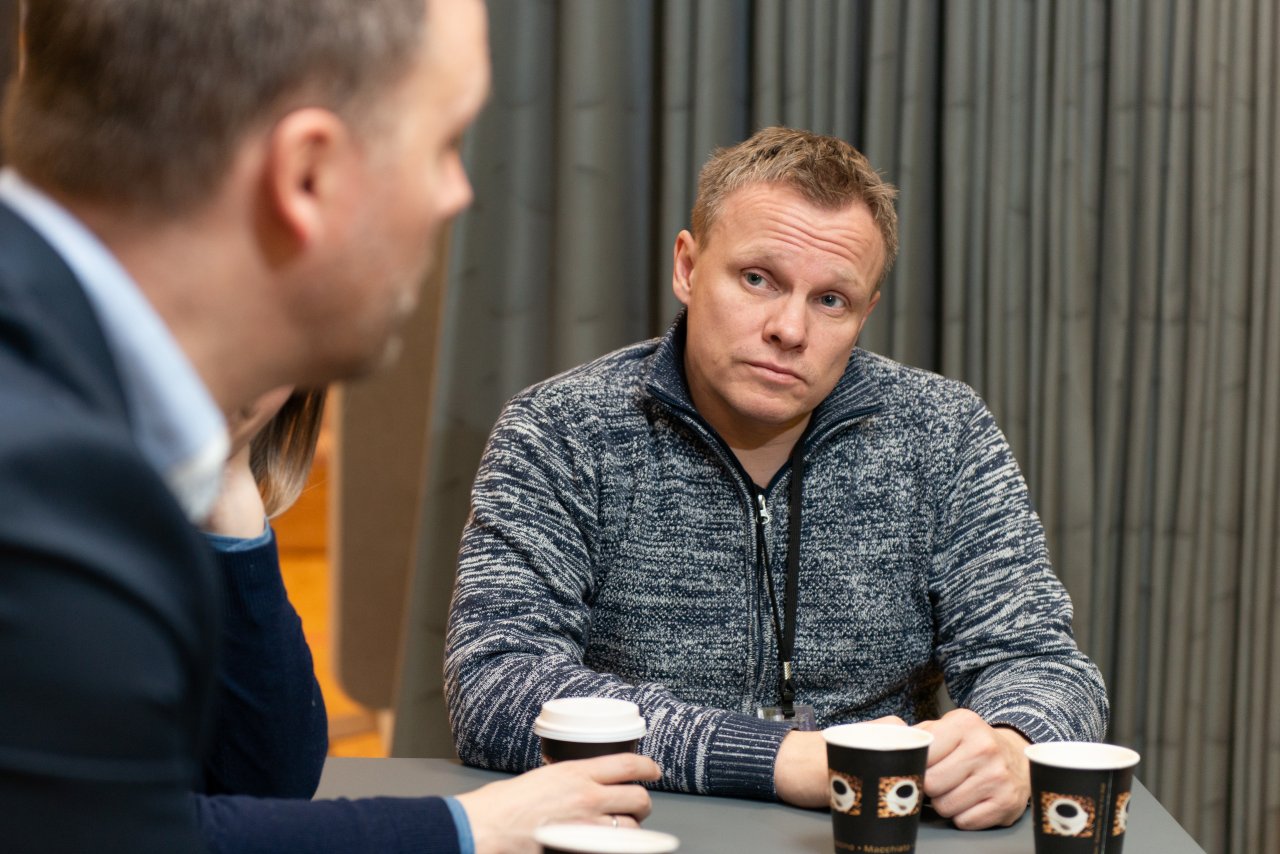 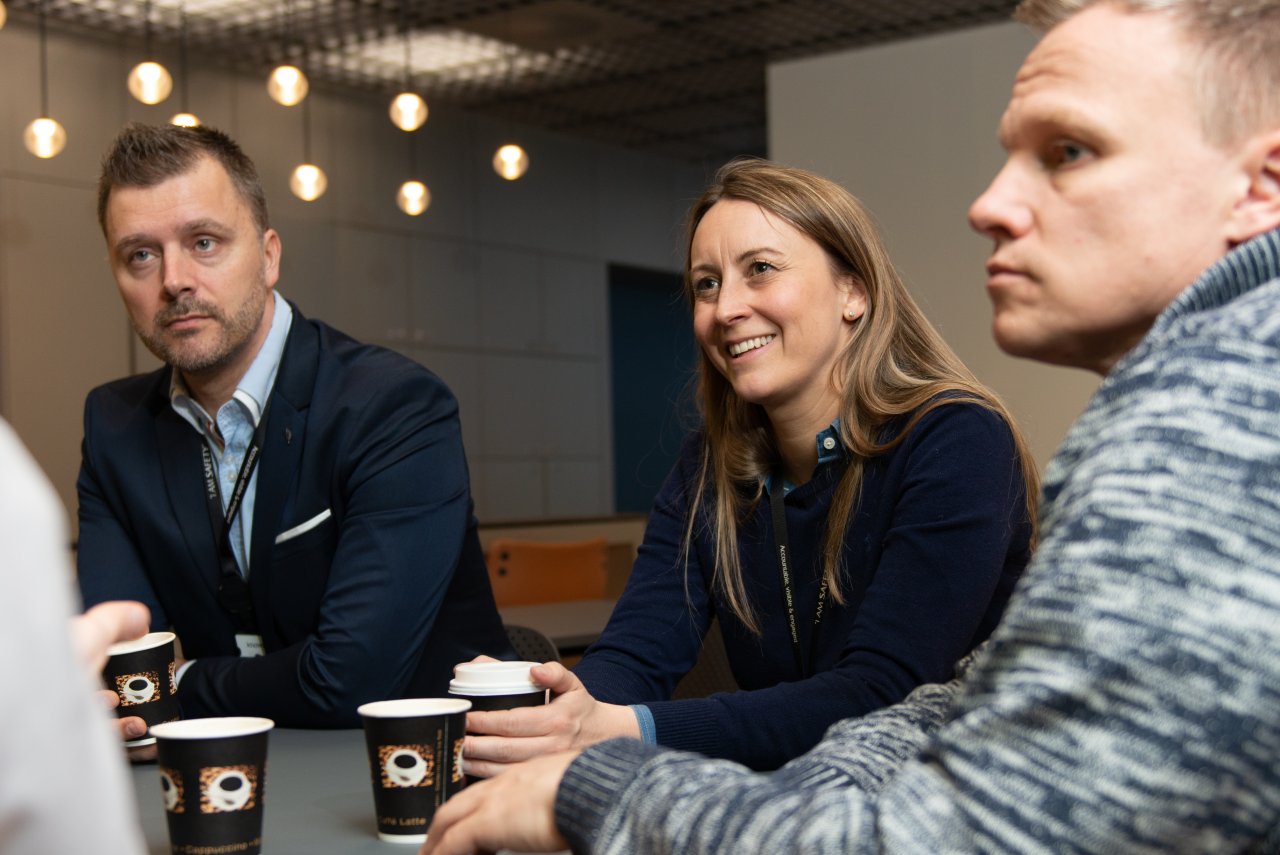 An informal meeting point during the day can lead to interesting discussions - and even possible problemsolving! (Photos: Torstein Lund Eik)

Since 2017, Johan Sverdrup has had a mandate to be a digital frontrunner. To deliver on this mandate software developers were brought onboard to the subsurface team, Henriette Dorthea Aarrestad explains.

“We quickly realized that if we were going to be a true frontrunner, we needed a fresh set of eyes to look at who we were and how we work. We knew that Software Innovation was a forward-leaning community with the right skills and the right mindset, and they thought this sounded like a lot of fun. ”

Software Innovation (SI) were as always up to the challenge. As a result, Lindvar Lægran and Janniche Lange became the first two developers to join the subsurface team. Henriette is the team leader for the subsurface team and has been the driving force between this collaboration together with geologist Per Olav Eide Svendsen.

"We’re one of the areas that generate the most data in the entire company and it’s going to be greatly increasing in the future. It’s not just about improving the way we work but revolutionizing the subsurface team as a whole."

Adapting on the go

Per Olav explains that traditionally petroleum technology departments have been very plan driven and if something didn’t go according to the plan, it was often put down as bad planning. But recently, they have started acknowledging that some tasks are iterative and continuous, and may require a different approach.

Since development started on Johan Sverdrup the team’s ability to quickly adapt to challenges has been crucial. Naturally, some things require solid planning but it’s not the case for all the work they do.

“There’s a mismatch between how much we rely on plans and reality. Working on Johan Sverdrup has shown that we have to be able to adapt and change as we go,” Per Olav explains.

Agile philosophies focus on optimizing for value, not resource utilization or following a plan, as well as preparing to tackling change instead of fighting it.

“We’re usually caught up in a big system with an elaborate planning process, and our main idea is to shake things up to help us better iterate our way forward. This let’s us adapt to change and even stop in time if we have to."

Check out the aftermovie from the 2019 RepHack hackathon! (Video: Per Olav Eide Svendsen)

If you want to adapt an agile mindset, who better to spar with than Software Innovation? Now, the subsurface team have adapted kanban boards, sprints, MVP’s and other agile frameworks to their workday. They’re a tech-curious team and Lindvar tells us that both he and Janniche were welcomed with open arms into the subsurface world.

In the beginning there weren’t any clearly defined projects to work on and it was more a matter of getting to know the team and the subsurface world.

“Getting to know the subsurface domain and how they work has been and still is very interesting. It helps us to create an even better solution for them when we’re developing,” Lindvar says.

“Quite often IT comes into the process at a late stage, but the earlier we’re a part of the conversation the more we can learn, influence and help improve the end result,” he adds.

Espen explains that working together with the core business and geophysicists like Max has been an eye-opener.

“Combining our competence on systems and software development with their impressive knowledge about physics is what’s helping us tap into this new insight that we haven’t been able to before.”

Suggesting ideas or asking questions feels much more natural to do when the person who can answer it is sitting right next to you.

“You have to be close to each other to have these informal discussions around questions or ideas. It doesn’t take much of a distance before you lose track of the great question or idea you might have had,” Espen says.

The kanban board might be the most visual change to the team's office. Photo: Torstein Lund Eik/Equinor 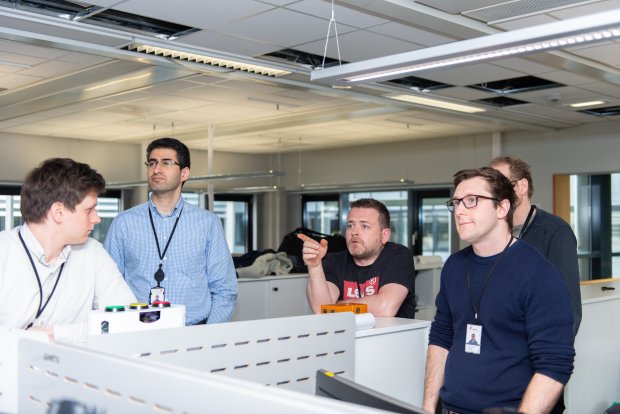 Having tasks visualized on a board makes it easy to have discussions and staying up to date. Photo: Torstein Lund Eik/Equinor

The kanban board might be the most visual change to the team's office. Photo: Torstein Lund Eik/Equinor

Having tasks visualized on a board makes it easy to have discussions and staying up to date. Photo: Torstein Lund Eik/Equinor

The fiber optics project is one of four projects that are part of Next Generation Reservoir Data Management Flow (NGRDMF). But projects aren’t the only thing the collaboration has brought with it, Per Olav says.

“We have a lot of technology available, and we are constantly getting new technology, but in reality a lot of them aren’t easily accessible because of competence barriers. It takes a certain level of competence to use them. We wanted to break those barriers, and we have been quite successful at it as well,” he says.

Thanks to having professional developers in the team the time it takes to have services up and running is much shorter. They can also test ideas much quicker than before.

“Instead of developing a solution with a large scope we can start small with a minimum viable product. This lets us build further as needed, and it’s easier to develop a good solution or end the project entirely if we see it’s not working,” Lindvar tells us.

Making technology accessible isn’t only about having the developers next to them - it’s also about making the code itself accessible and maintainable for the users, Espen explains.

“Software is becoming more and more important, no matter what business area you work in. We have to be a part of making it more accessible for everyone."

“Seeing how they work and realizing how much use a geophysicist or geologist can make out of our code has been an awakening. As developers we tend to be very focused on making our solutions easy to access and maintain by IT people. But we should strive to make them more accessible for people outside IT." 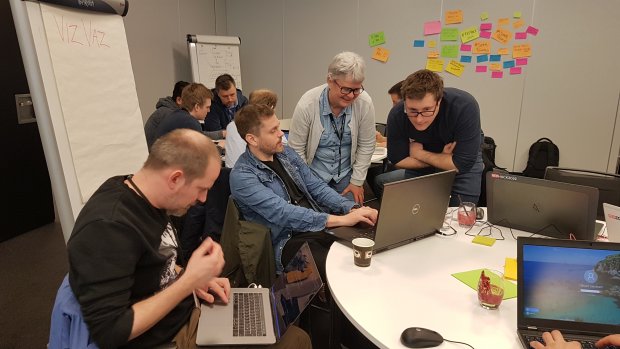 Rephack 2019 was the first hackathon hosted by the subsurface team. Photo: Per Olav Eide Svendsen 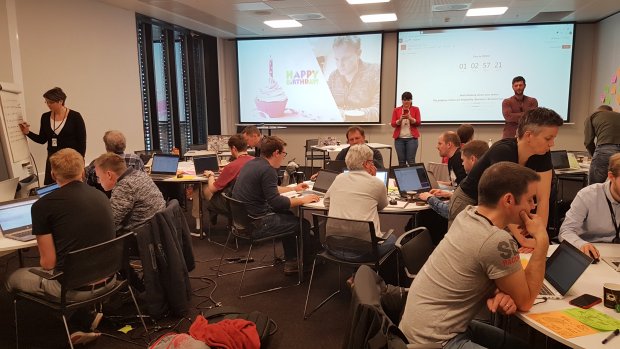 It was a joint effort by Johan Sverdrup, Digital Academy and Software Innovation Photo: Per Olav Eide Svendsen 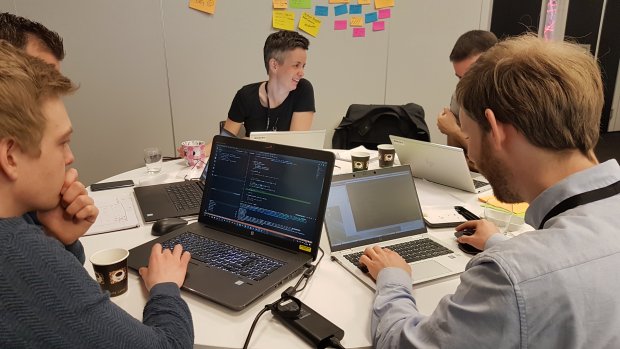 27 people attended, with a 50/50 split between domain experts and developers. Photo: Per Olav Eide Svendsen

Rephack 2019 was the first hackathon hosted by the subsurface team. Photo: Per Olav Eide Svendsen

It was a joint effort by Johan Sverdrup, Digital Academy and Software Innovation Photo: Per Olav Eide Svendsen

27 people attended, with a 50/50 split between domain experts and developers. Photo: Per Olav Eide Svendsen

Creating a culture of change

We can all agree that both technology and data are a defining factor in taking us further. But helping a digital culture grow is just as important and goes far beyond new tech or tools.

“We’re taking a serious look at not just how we work, but how we think. Adapting an agile philosophy is an example of that,” Per Olav says.

“Working together on equal terms plays an important role in this. This kind of collaboration is essential in adopting a digital mindset and culture. We’re exchanging a lot of learning across our “silos” and questioning a lot of established truths,” Per Olav explains.

One question remains: have they been able to revolutionize the way a subsurface team works?

“We’re definitely off to a great start! I am proud when I see the cultural change that has happened in our organization. Now, the team is really excited and asking for when the next developer is coming onboard."

The Johan Sverdrup team have set an ambitious target of recovering 70% of the oil within the reservoir. While the reservoir is world-class, but that alone won't bring them to 70% recovery.

But in order to get across the finish line it’s not all about numbers and tech:

“There’s a very strong correlation between building a digital culture and having lots of fun. And we’re having a lot of fun!”